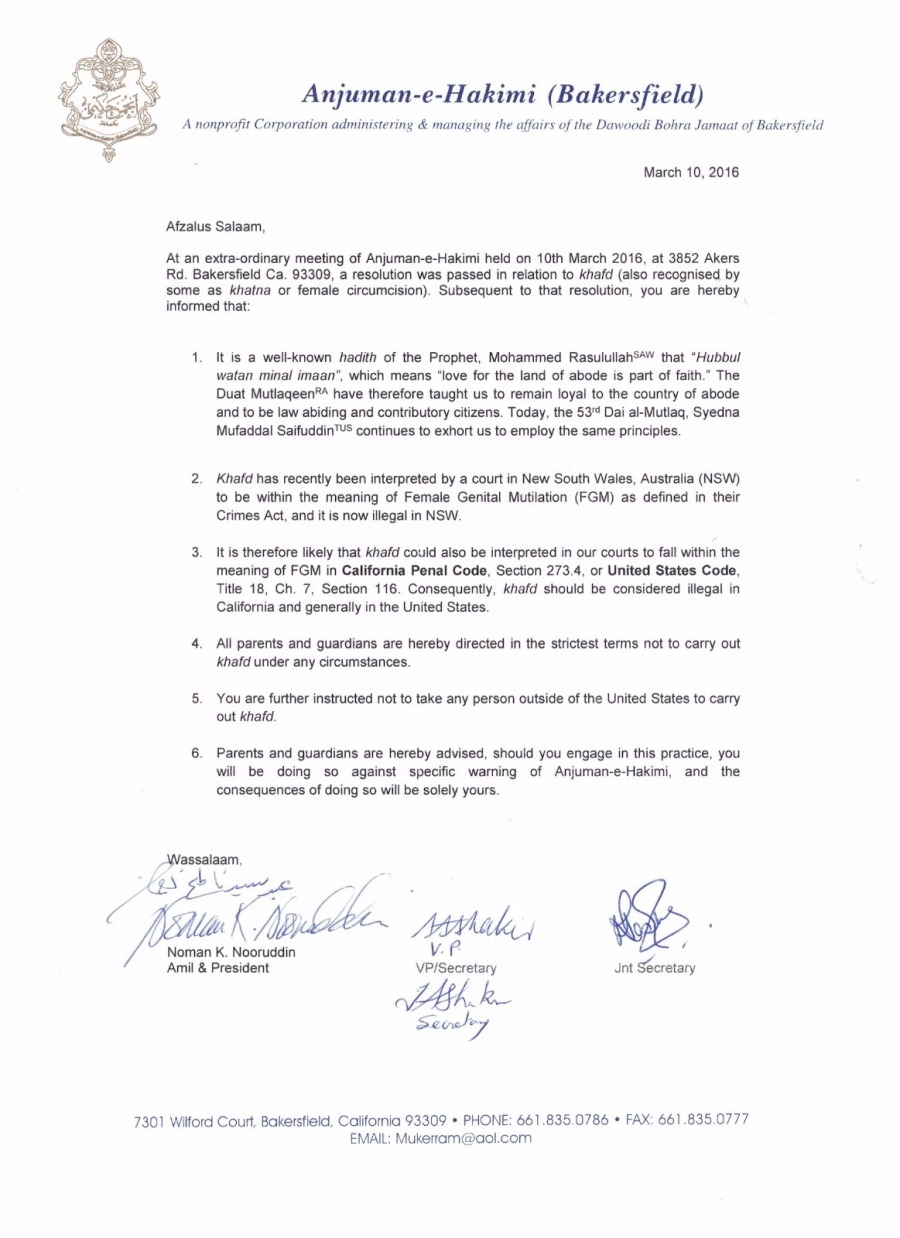 I grew up in Bakersfield, CA and throughout my childhood and adolescence I attended the Bakersfield, CA Dawoodi Bohra jammat (congregation). I don’t anymore and haven’t in a very long time and I’ll be the first to let you know that fact. I still have family members and friends who do, so by way of extension, I still am connected with this jammat.

I was beyond ecstatic to hear that the Bakersfield, CA jammat had passed a resolution against the practice of Khafd/Khatna, otherwise known as FGC in the larger, global community.

I, too underwent this practice when I was a young girl in the early 1990s. My family was on a summer vacation trip to Mumbai. We regularly went every other year to see family. The summer I was seven was when it happened to me.

I don’t remember much. Just the building. My skirt being raised. Something cutting me. And my mother comforting me afterward. (You can read more about my own story in FGC: A Continuing Tradition.) Yet, the experience had a lasting effect on me, one that I truly did not understand until I was years into my gender violence career.

The continuation of khafd/khatna or FGC is a complicated issue. The people who continue it cannot be viewed as ignorant or uneducated. Many times khatna is done out of love, out of this misconception that in order to be a good mother, one has to ensure their daughter undergoes this type of pain. This is the power of tradition and it is one reason why FGC has continued for thousands of years in varying communities in various parts of the world.

Yet, this resolution banning Khatna in Bakersfield, CA gives me hope. The creation of such a public resolution is a first step and recognition that khafd/khatna is a form of gender violence. That it should not be continued simply out of a sense of duty or tradition. The resolution showcases that sometimes “tradition” is bad, and in this case it can hurt others.

Even with the passage of this resolution, I know very well that some individuals will ignore the edict, and continue khafd/khatna or FGC on their daughters. They will believe that the public resolution was imposed on them out of a formal need because the law of the land they reside in bans it. In fact, if you examine the public resolution closely, you will note that it specifically mentions that khafd has been interpreted as FGM by the United States and by the state of California.

I already am hearing whispers that this resolution will be ignored not in Bakersfield, but in many other jammats around the world. The public resolutions that have come out so far in Sydney, Melbourne, London, and now Bakersfield show that the religious leaders of these jammats do indeed take this matter seriously, yet it will be up to the individuals themselves to follow their guidance. And it will be up to all those who are working in the anti-FGC world to support the religious leaders in helping their jammats let go of traditions that have no place in our modern world through education and continued dialogue.