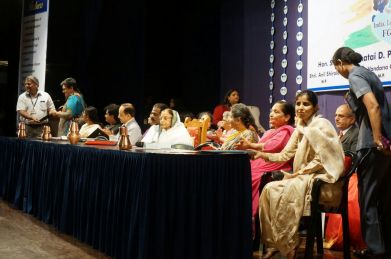 giving a moving speech of her views on the subject.  This was the first-of-its-kind event in India, where the topic of ‘khatna’ – a closely guarded and dark secret – was discussed in an open public forum.  The intention behind the program was to generate a debate on the subject as this is a gross violation of child rights and is seen as a form of violence against women.

In light of International Women’s Day, it was also announced that UWA would initiate a yearlong programme on the awareness and eradication of this practice in the country. During the course of the programme, part of the plan was to have students of Social Studies/Law/ Medicine/Liberal Arts/Humanities etc. participate by writing on the issue of ‘khatna’ which falls under the World Health Organisation’s definition of Type 1 female genital mutilation/cutting (FGM/C).

At the programme, co-founders – Shaheeda Kirtane and Insia Dariwala – represented Sahiyo’s views and talked about their work on ending the practice of ‘khatna’ in India.

Shaheeda’s speech is presented below:

“Honorable Smt. Pratibha Patilji, Organizers of the event – the University Women’s Association, members on the dais and friends,

I am happy to be here today and to share the stage with this amazing audience who has taken a keen interest in a cause that is very dear to my heart.

Until very recently, “khatna” or female genital cutting was only mentioned in hushed whispers amongst women from the Dawoodi Bohra community. A few very brave women like my mother – Dilshad Tavawalla, Masooma Ranalvi and our Sahiyo co-founder, Aarefa Johari, shared their personal trauma about this “dark secret” with the world. It is the strength of their voices along with the recent convictions of three Dawoodi Bohras from Australia that has created a tidal wave of change, which allows me to be here today. Here – in the heart of Pune – a city of social reform and social reformers.

The world believes this violence against young girls to be an “African problem”. Many are blissfully unaware of its deep roots in India and Asia.

Thank you India and the women of India for taking up an issue that otherwise affects only a minority within a minority. It tells me that “khatna” has affected more than just Dawoodi Bohra women of India, and it is a sign of the times when all women of India are uniting for each other beyond economic, social, cultural and religious boundaries.

One can only imagine the trauma of female genital cutting on an innocent seven-year-old girl child. Sometimes, the skin over the clitoris is cut; sometimes, the entire clitoris is cut, and sometimes much, much more. They call this the “haram ki boti”. This, itself, should tell you a thing of two about its perception within the Dawoodi Bohra community.

The clitoris has 8,000 or more never endings, and it is THE MOST SENSITIVE part of the female body. The function of the entire penile shaft is performed by the clitoris, which is smaller than a peanut, but twice as sensitive as the penis.

To damage or to remove the clitoris or any part of the female sexual organ is to permanently suppress or deny a woman sexual pleasure.  It leaves an emotional scar and can adversely affect marital relationships and sexual life. Besides the possible physical consequences of “khatna”, like infections, excessive bleeding (particularly with botched procedures), burning sensation while urinating and swelling of the genital tissue, it is vital to note that the practice can have a negative impact on the mental health of a woman. According to the World Health Organization, long-term psychological effects of “khatna” include anxiety, depression, post-traumatic-stress-disorder, low-self-esteem etc.

Through the gathering today, I think we can make a difference in the lives of innocent little girls who are unknowingly waiting in line to be “under the knife”. I believe India is ready to save the Dawoodi Bohra girl child.

Sahiyo and Speak out on FGM have collaborated for the Each One Reach One campaign. We

have already made considerable strides in creating awareness of this great betrayal of trust and personal violation. At Sahiyo, through our “I am Bohra” photo-campaign, we have tried to put real faces behind all the voices of opposition against this gruesome and inhumane practice.

I am hoping that more of you will join us in our endeavor to stamp out the practice of “khatna”. Our individual efforts through social and news media outreach have achieved limited success, however, through the strength of our collective voices, I am positive that we will achieve our ultimate objective – a complete end to female genital cutting in India!

Thank you for your time and patience. I am honored to be invited here, and on behalf of Sahiyo, I invite you to join us in our efforts.”