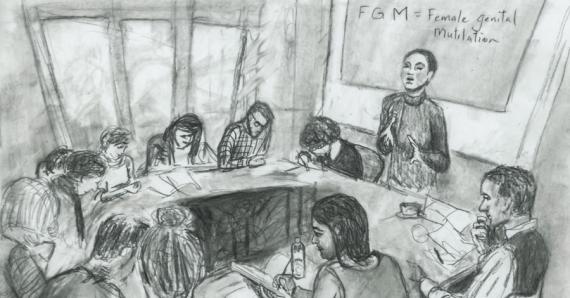 (This story originally appeared on the Guardian.com on February 8, 2016 and reappeared on the U.S. State Department’s official blog on June 1, 2016. It is republished here with permission).

I was sitting in an anthropology seminar at the University of Texas cramming for a final, only half-listening to a fellow classmate describe her research project. Female genital mutilation is the partial or total cutting of the external female genitalia for non-medical reasons,” she mechanically described. “The procedure typically take places when the girl is seven years old. The process is usually carried out by an older female relative. And once the ritual takes place, it is almost never discussed.” As she spoke, goosebumps began to form and I sat paralysed in my seat. Memories I had suppressed since childhood came flooding to the foreground.

I was seven years old. My parents had sent my brother and me to visit family in India for two months. On a humid mid-summer afternoon, my dad’s sister decided to throw a party for my brother, celebrating his completion of the Qur’an. At the party, she pulled me aside, wielding a jumbo-sized Toblerone. She said that if I stayed on my best behaviour, I wouldn’t have to share it with anyone, including my brother. I was overjoyed.

My aunt was a doctor. So when she led me downstairs to her clinic and instructed me to lie flat on my back on her operating table, I didn’t think to question her authority. With no anaesthetic and very little warning, she performed the ritualised cut. After it was over, we headed back to the party in silence. I remember sitting in a corner by myself, unable to open the chocolate bar bribe and feeling sick to my stomach. I blocked out the memory, until the day when I discovered that what happened to me had an acronym that could be found in the glossary of a medical anthropology textbook.

When I confronted my parents, they were stunned. My aunt had carried out the ritual without their consent. My father felt a unique betrayal. This was the same little sister he encouraged to pursue medicine in the first place. He had no idea that female genital mutilation or cutting (FGM/C) was even practised within the Dawoodi Bohra community, a Shia subsect from India’s coastal state of Gujarat.

As I learned more about the practice, I discovered that more often than not, men are oblivious and may not even know it is happening — or has happened — to their daughters, sisters, and mothers. I learned that FGM/C dates back thousands of years, predating Islam and Christianity. It is a cultural practice that is neither rooted in religion nor bound by geography nor restricted to a socioeconomic class. Like other forms of gender-based violence, FGM/C is a manifestation of power and means of controlling the sexuality of women and girls.

In recent years, many countries have passed laws to criminalise the practice of FGM/C. Yet, it is an extraordinarily difficult crime to prosecute. Laws alone are not enough. For there to be a sustainable end to this practice, there has to be a radical culture change from the ground up, that promotes zero tolerance to any and all forms of excision.

As I have engaged with friends and family members who support the ritual, some will argue that it is not technically mutilation. They even go as far as asserting that “mutilation is what is done in Africa”, as though our community practises a more civilised, humane version. According to the World Health Organisation, all versions of FGM/C cause harm, both physical and psychological, which renders the “good FGC v bad FGM” debate meaningless.

One of the greatest challenges in raising awareness on FGM/C is that many survivors are shamed into silence. If they voice dissent, their communities might socially ostracise them.

Within the last few years I have noticed a shift. More and more FGM/C survivors are courageously speaking out. Male relatives who may have never even been aware of the practice are also taking a stand. From a recent Change.org campaign launched by over a dozen Dawoodi Bohra survivors in India, to Safe Hands for Girls “a youth-powered movement in Gambia”, communities are movement-building and speaking out against FGM/C in greater numbers.

I encourage you to break the culture of silence around FGM/C by sharing this video containing testimonials of fellow survivors and advocates, and joining the global conversation to #endFGM.

About the Author: Maryum Saifee serves as a Policy Advisor in the Secretary’s Office of Religion and Global Affairs at the U.S. Department of State.