Sahiyo’s fifth Thaal pe Charcha event in Mumbai on April 7 was perhaps its most special one so far. On popular demand by the regular participants of the group, this Thaal pe Charcha was a miti sitabi — a special women’s meal hosted in honour of the Prophet’s daughter, Ma Fatema. At Sahiyo’s event, this special meal was hosted as a tribute to those Bohra girls who were not allowed to participate in miti sitabis if they were not circumcised.

Thaal pe Charcha, which loosely translates as “discussions over food”, is a Sahiyo flagship programme that brings together Bohra women and men in a safe space to share their feelings, experiences and views on Female Genital Cutting or khatna, while bonding over traditional Bohra food. This programme began in February 2017 with a group of 16 Bohra women and now has more than 30 women and men associated with it.

The April 7 Thaal pe Charcha had 21 of those participants, including five men. In fact, while there were two women-only thaals (traditional large dishes for seating 8 people) for the miti sitabi meal, this was the first time that a group of Bohra men had their own historic miti sitabi thaal. The meal began with traditional jaggery and roti, which is eaten at the start of every miti sitabi. At the end of the meal, participants completed the traditions by applying henna, perfume and small gifts with each other.

The only tradition that this miti sitabi did not follow was that of khatna, of using khatna as a definer of who a true Bohra is and who gets to sit at special community thaal events. This miti sitabi was open to all.

At the Thaal pe Charcha event, participants also shared stories about their journeys after they started speaking out about FGC. One participant, who was attending a Thaal pe Charcha for the first time, talked about how she resisted family pressure and managed to spare her younger daughter from the cut, even though she could not save her older daughter. Another participant shared her experience of having a khatna discussion with her father, who was convinced that FGC was mandated by the Shariat. However, after she had a heartfelt conversation with him, her father acknowledged the pain she had been put through and apologised to her.  Participants concluded the Thaal pe Charcha with a lively discussion on other kinds of social norms, besides khatna, that patriarchal communities use to repress women. 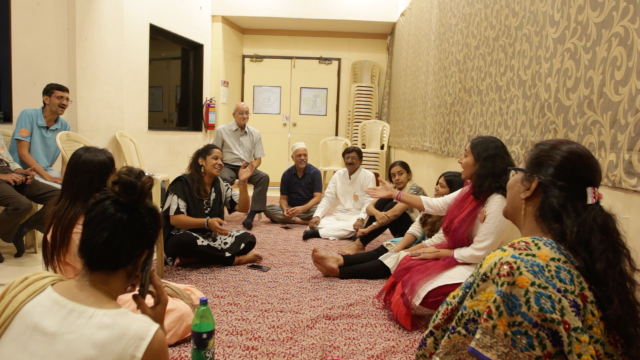