My name is Aisha Yusuf, and I am a female genital cutting (FGC) survivor. I was born in Somalia, a country with one of the highest FGC rates in the world. Recently, Somalia was named by the Thomson Reuters Foundation as being the fourth most dangerous country for women, with FGC happening to 98% of women. I was cut when I was five-years-old. Although it took me a long time to understand my experience, I was enraged that it had happened to me.

Honestly, I only recently became more active in advocating against FGC. I chose to tell this specific story for my digital story because this was a moment in which I came to terms with why female genital mutilation was bad in our community.

Sharing the story with the group during the Sahiyo Stories workshop was both a relief to me as it was informative. Even though I was impacted by FGC, I knew little about it. I did know that the practice of FGC is unnecessary, even though it’s culturally perpetuated. Though many people try to justify it through religion, I learned it’s actually not in the 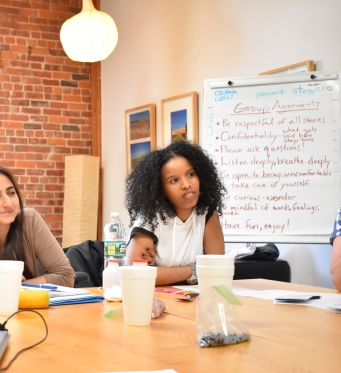 practice of Islam. This storytelling process allowed me to be comfortable with sharing my story instead of feeling shameful about it. Most people in my culture think that by talking openly about it, I’m talking negatively about this secret of the community, but I believe what I’m doing is bringing awareness on a topic that is harmful and so evil. Since 98% of women in Somalia are cut, I want that statistic to be a thing of the past and no longer be true in the 21st century.

Additionally, I am currently offering support to a change.org petition to advocate to ban FGC in Massachusetts, and hopefully, all other U.S. states where there isn’t already a law.

Aisha Yusuf is a twenty-nine-year-old female from Somalia, residing in Boston, Massachusetts with her family. She moved to the states as a child and grew up in a little neighborhood called Jamaica Plains. She went to the University of Massachusetts Boston and graduated with a B.A in Psychology in 2017. She works as a case manager for addiction services at the Andrew House Program in the greater area of Boston. As a case manager, she helps people who are in difficult situations find resources they need and how to access them, create plans for treatment or recovery, work with other mental health and human service providers, and monitors her client’s progress with their treatment plans. She considers herself an activist on many issues including women’s rights, poverty and economic injustice, child welfare, healthcare reforms, and racial injustices. During her leisure, she enjoys reading, hiking, traveling, working out, and cooking healthy foods.