Shame. Deceit. Confusion. On the first day, sitting around a large table in a light-filled room in the StoryCenter workshop space in Berkeley, California, these words were repeated over and over again by each woman sharing her story of being cut as a young girl. And in most cases, the story was disturbingly similar: a young girl is taken to a strange place by a female family member, she is not told what is going to happen to her except some euphemism that means nothing to her, the girl is cut by stranger, she experiences pain like she’s never experienced before and she is told never to talk about it again. But the experience stays with her…

Hope. Love. Protection. And then there were stories by women who, as girls, had been spared the cut and those who had worked through their trauma, so there were also inspiring words that came out of these stories which made the whole StoryCenter process a positive and uplifting experience that will stay with me for years to come.

, first invited me to this workshop for US-based anti-FGM/C activists, I wondered what I would possibly talk about. As an activist for WeSpeakOut, I have told my khatna story in many different forums before, so what could I talk about now?  We were tasked with preparing a 300-word script outlining the story we wanted to tell and, for weeks, I vacillated between multiple topics.  I finally chose to focus on the reaction I received from my community, the Dawoodi Bohras, when I began to speak out about the secretive practice of FGM/C/Khafz/Khatna.

While describing my outline to my fellow workshop participants, I felt unsure that

anyone would care about my story and whether it was a story that was even worth telling.  But when I finished, there was a pause, then someone said, “That was powerful.”

Over the next 2 days, I refined my story and built my video with much input from Amy, Orchid and the other participants who I, very quickly, would call friends.  Their opinions about word choice, sentence structure, and which images and videos to use made my story come to life in a way that I had not imagined!

At the end of the third day, I had a new creation.  Yes, it was still a little rough around the edges and needed some minor editing but it was a revelation to be able to produce a video of my story in 3 days that resonated with other people.  I’m proud of what I did, but prouder of the fact that it was a true team effort. After all, it takes a village!

As we share our videos, I hope people realize that, although they may find it hard to speak out, it is so incredibly beneficial to so many others who feel they have no voice. That is why I speak out. 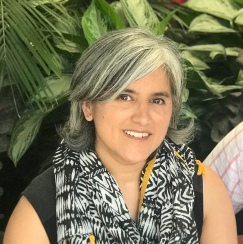 Zehra Patwa is the Co-Founder of WeSpeakOut, an organization that strives to work for equal rights for Bohra women in all spheres of life, specifically, on Female Genital Mutilation/Cutting (FGM/C) or khafz. She grew up in London and was educated at the University of Bradford Management Centre in the UK and the Université de Montpellier in France. Zehra serves on the Board of the Foote School and Co-Chairs MOSAIC, the Foote School’s multicultural affairs and diversity group. She recently joined the Board of Integrated Refugee and Immigrant Services (IRIS). After discovering well into adulthood, that Type 1 FGM/C was practiced in her community and that she, too, had been subjected to it, she decided she could no longer keep silent.  Although she has no recollection of the practice being done to her, she is vehemently opposed to it and has been working with the WeSpeakOut group to expose the practice within, and outside, the community.