In the Zero Tolerance campaign to end Female Genital Mutilation (FGM), what has been noted is the arc of progress. Increasingly, women and men from practising groups have declared support for ending FGM; and in several countries, the prevalence of FGM has decreased significantly. A BMJ Global Health study reported that the rates of FGM have fallen dramatically amongst girls in Africa in the last two decades. Using data from 29 countries going back to 1990, the BMJ study found that the biggest fall in cutting was in East Africa where the prevalence rate dropped from 71% of girls under 14 in 1995, to 8% in 2016.  Some countries with lower rates – including Kenya and Tanzania, where 3-10% of girls endure FGM – helped drive down the overall figure. Nevertheless, UNICEF’s groundbreaking report shows that whilst much progress has been made in abandoning FGM, millions of girls are still at risk. 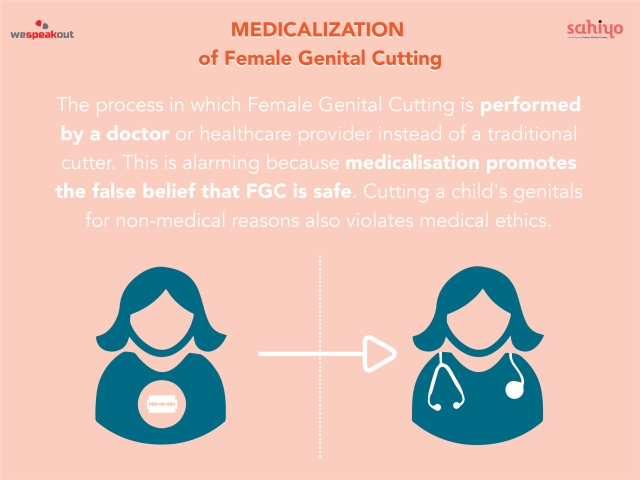 Flourishing against this backdrop is the compromise of medicalisation of FGM that competes against progress in the Zero Tolerance Campaign. A disturbing number of parents are seeking out healthcare providers to perform FGM. According to the World Health Organization (WHO), medicalisation is when a healthcare provider performs FGM in a clinic or elsewhere. Such procedures are usually paid for under the assumption that medicalisation is not FGM, and is done to mitigate health risks associated with the practice. Consequently, in recent years, the medicalisation of FGM has taken place globally, particularly in Egypt, Indonesia, Kenya, Malaysia, Mali, Nigeria, Northern Sudan, and Yemen. In many of these countries, one-third or more of women had their daughters cut by medical staff with access to sterile tools, anesthetics, and antibiotics. The non-governmental organization, 28 Too Many has investigated the involvement of health professionals and has highlighted what must be done to reverse this trend. 28 Too Many reported that the medicalisation of FGM in Egypt is an enormous challenge. Currently, 78.4% of incidences of FGM in Egypt are carried out by health professionals. Egypt had the highest rate of health workers performing FGM at 75%, with Sudan at 50% and Kenya at 40%. A 2016 study by The United Nations International Children’s Emergency Fund (UNICEF) and the Africa Coordinating Centre for the Abandonment of FGM/C (ACCAF) also found that FGM is increasingly being performed by medical practitioners.

Parents and relatives seek safer procedures, rather than outright abandon FGM. The medicalisation trend has conveniently forgotten that FGM violates women’s and children’s human rights to health, to be free from violence, to have the right to physical integrity and non-discrimination, and to be free from cruel, inhumane, and degrading treatment. The “just a nick” is essentially gender-based violence (GBV). What is being “nicked” is still part of a woman’s labia majora, labia minora or clitoris. The medicalisation of FGM perpetuates that women are inferior human beings. This is not in harmony with international human rights standards.

There is also clearly an economic incentive for promoting medicalisation. Medical personal perform it for financial gain under the premise that if the crux of the issue is the health side effects and pain, by using sterilised instruments and medication the problem has dissipated. The misguided assertion that medicalisation is a viable option is ignoring the fact that all types of FGM have been recognised as violating human rights. These rights that have been codified in several international and regional treaties mirror worldwide acceptance and political consensus at various UN world conferences and summits. Committees such as The Committee on the Elimination of All Forms of Discrimination against Women, (CEDAW), the Committee on the Rights of the Child, and The Human Rights Committee have been active in condemning FGM. Medicalisation goes against the principles enshrined in these treaties and conventions.

The disturbing medicalization trend continues to argue that this less severe form of FGM can protect girls and women from harm. This was echoed in The Economist article of June 18th, 2016, ‘Female Genital Mutilation: an Agonising Choice’. In the article, it was asserted that because three decades of campaigning for a total ban on FGM have failed, a new approach is warranted. The article advocated “nicking” of girl’s genitals by trained health professionals as a lesser evil. This reasoning was echoed in the Journal of Medical Ethics by two U.S.-based doctors, Dr. Kavita Shah Arora, Director of Quality, Obstetrics, and Gynaecology at the MetroHealth Medical Center in Cleveland, and Dr. Allan Jacobs, Professor of Reproductive Medicine at Stony Brook University. They wrote that “we must adopt a more nuanced position that acknowledges a wide spectrum of procedures that alter female genitalia.” They assert that they do not believe minor alterations of the female genitalia reach the threshold of a human rights violation. They also asserted that the nicking of the vulva and removing the clitoral hood should not be considered child abuse. They posit that by undergoing these acceptable procedures in the U.S. during infancy, girls can avoid the risk of being sent abroad for more extensive procedures.

These doctors and writers from influential respected journals are often held in high esteem by decision-makers, policy-makers, and experts. However, the advocation of medicalisation grotesquely undermines the hard and courageous work undertaken to end FGM worldwide. The medicalisation trend has ostensibly failed to recognise that the proposal of removing the clitoral hood and “just nicking” the vulva contradicts the WHO’s statement that there is absolutely no reason, medical, moral or aesthetic, to cut any part of these exterior organs.

There are compelling reasons why the medicalisation of FGM is fundamentally wrong.

The medicalisation of FGM is not an appropriate response to the health risks associated with FGM. All FGM causes a variety of negative outcomes for the health and psychological well-being of women and girls. Medicalisation fails to eliminate long-term gynaecological and obstetric complications, as well as the lifelong emotional, psychological and sexual problems. It does not prevent the feelings of anxiety, betrayal, depression, low self-esteem, panic, phobia nor other psychological issues. As FGM has no proven medical benefits, as professionals who have sworn to the Hippocrates oath to do no harm, ultimately, it is unethical to contribute to the continuation of a procedure that is quite harmful and disabling for women. Medicalisation of FGM gives it an aura of normalcy, legitimacy, and acceptability. The mutilation of females is outrageous when considering that the alterations proposed are both traumatic and life-changing.

An additional concern of the medicalisation trend is the bleak message that removing a female body part for non-medical reasons is acceptable as it is just a “nick.” Who will be there to determine the measure of the “nick”? What part shall be nicked? The clitoral prepuces? The labia minora? Near the special receptacles of nerve endings that are clustered in the clitoris?  The skin of the inner surface of the labia? Is the medicalisation trend assuming that this undefined “nicking” by a chosen trained professional now is safe and correct?

The implication that it is just a nick obscures and trivializes the underlying degradation that this nick imposes on a woman and the senseless attack on women’s’ genitals for no other reason than that they are female. It reinforces the sense of inferiority on this already marginalised gender.

FGM is not open for debate without violating international law and medical ethics. As long as it is accepted in any form, FGM will thrive. Partial FGM is simply not acceptable. A nick is simply unacceptable.  The key phrase is zero tolerance. 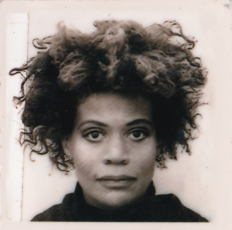 Lorraine is is a British solicitor and a New York lawyer. She is currently an international law professor in the Anglo-American Law degree programme at the Universitié De Cergy where she lectures on gender law and human rights, and at the Universitié De Paris-Dauphine where she lectures on the Legal Aspects of Gender Violence. She is often an invited speaker on GBV and FGM. Recently, she was invited as a speaker to lead the medicalisation workshop at the End FGM European Network conference that was held in Paris.

One thought on “The Disturbing Trend of Medicalising Female Genital Mutilation”