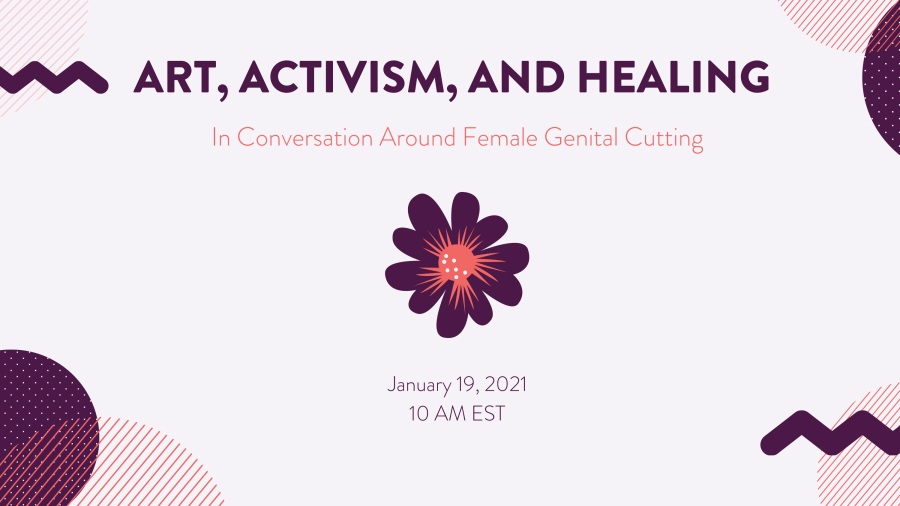 Across the world, millions of women and girls are at risk of female genital cutting (FGC). FGC can have severe physical and psychological impacts that last a lifetime. As the painful effects of FGC are brought to light more and more, activists and therapists alike are looking for more ways to support survivors and protect future girls from this practice. Art is an underutilized tool to create awareness about this issue and support survivors’ healing.

As an organization whose mission is to use storytelling to empower communities to abandon FGC and support survivors’ healing, Sahiyo is one of the key advocates for utilizing art as a means of supporting these effectors. From the Voices To End FGM/C campaign, the #MoreThanASurvivor collages, and the Faces for Change project, art and activism have long been part of Sahiyo programming.

On January 19th, 10 a.m. EST, Sahiyo will be hosting the webinar, Art, Activism, and Healing: In Conversation Around Female Genital Cutting. During this inspiring event, you’ll hear from four expert panelists, Owanto, Andrea Carr, Sunera Sadicali, and Naomi Wachs, as they discuss art and its role in supporting survivors’ healing, how activists and survivors alike can use art to make a change in their communities, and working toward prevention efforts to end female genital cutting.

Following the vein of one of our previous webinars, Moving Towards Sexual Pleasure and Emotional Healing, the speakers will first introduce their work and their personal journeys related to this subject and then we will have a question and answer session led by Sahiyo co-founder Mariya Taher.

To hear more about how art can help you as a survivor and/or an activist, please register for the event. This event is open to anyone who wishes to attend.

Owanto is a multi-cultural Gabonese artist born in Paris, France. She was raised in Libreville, Gabon, and later moved to Europe to study philosophy, literature, and languages at the Institut Catholic de Paris in Madrid, Spain. Her multidisciplinary practice emerges from a 30-year career where she explores a variety of media, including photography, sculpture, painting, video, sound, installation, and performative works. Her practice enables her to engage with consciousness through the notion of memory, both personal and collective.

Andrea Carr has worked across a broad spectrum of the performing arts, bringing vitality to global ecological and social themes. Embracing change along the way, her work often distills into designs that move between art installations and immersive environments. Her work has been included in the U.K. representation of the World Stage Design Exhibition, in the Aesthetica Art Prize anthology, and in the ‘Designers Lead’ section of the Society of British Theatre Designers (SBTD) 2019 exhibition at the V&A. Andrea is also studying Process Orientated Psychology. She works from her Peckham Studio, her ‘dream palace,’ where she goes to ground her ideas, make models and mock-ups, and as a space for collaboration.

Sunera Sadicali was born in 1982 in Mozambique and later moved to Lisbon. She grew up in a family that was part of the Bohra Community; they were (and still are) the only members in Portugal/Iberic Peninsula. She underwent female genital cutting, or khatna, at the age of 8 in Pakistan, while visiting her grandparents on vacation. She moved to Spain to study medicine at the age of 19 and finished her Family Medicine residency in Madrid. Since 2015, she has lived and worked in the south of Sweden with her partner and three lovely kids. She has been politically active since the birth of her second child in 2012, with a focus on women’s issues, decolonial feminism, anti-racism, and healthcare activism.

Naomi Wachs has a B.S. in Theater from Northwestern University and a Masters in Social Work (A.M.) from the University of Chicago’s School of Social Service Administration. While at S.S.A., her concentration was in clinical social work with a focus on art-based methods, LGBTQ affirmative practice, and trauma-informed practice. From 2015-2017, as a German Chancellor Fellow with the Alexander von Humboldt Foundation under the guidance of Tobe Levin von Gleichen, she explored art-based practices as a tool for trauma healing and restorative dialogue with immigrant and refugee communities affected by FGM/C and other forms of gender-based violence. Currently, Ms. Wachs is a psychotherapist at Connections Health in the Chicagoland area where she works with individuals, couples, families, and groups with anxiety, depression, trauma, eating disorders, and relationship and identity concerns.
This event is sponsored by Sahiyo.