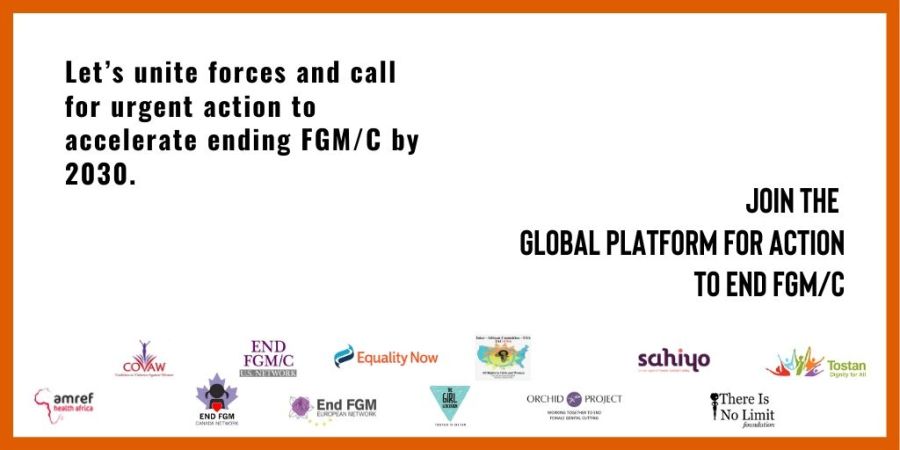 We must accelerate an end to FGM/C.

Every 11 seconds a girl somewhere in the world will go through female genital mutilation/cutting (FGM/C.)  The procedure is often extremely painful, and carried out with a crude, unsterilized instrument and without anesthesia.  Every 11 seconds.

FGM/C has no medical benefits, and often has disastrous effects, including a lifetime of psychological trauma, difficulty urinating and menstruating, maternal and child mortality, lack of sexual fulfilment, and sometimes, most tragically, the loss of a girl’s life afterwards.

This violation of a girl’s fundamental human rights has no place in the world today. It must stop. Now.

Last June at the Women Deliver Conference held in Vancouver, for the first time, global FGM/C activists from Africa to Europe, from Australia to Asia and to North America; women and men, civil society organisations, champions, survivors, and grassroots representatives, all came together to unite voices around a global call to action to end FGM.

Together, we are asking, no imploring, the international community to prioritize the ending of FGM/C worldwide, in the same way it responded to other urgent global issues such as HIV/AIDS.

It’s estimated that 200 million women alive today are survivors of FGM/C.  It is practiced on every continent except Antarctica. There’s no religious requirement for it, and it is practised in Muslim, Christian, Pagan, and even some Jewish communities.

There can be little doubt that female genital mutilation/cutting is among the worst human rights violation perpetrated against women and girls in the world today.  The practice continues because it is a social norm held in place by the expectations of whole communities–women, men, elders, even politicians.

And it continues to be a taboo subject, hidden behind a wall of silence around the world.  This too must stop.

Next week, at the International Conference on Population and Development (ICPD) in Nairobi, where gender equality and reproductive and sexual rights are high on the list of priorities, there is a tremendous opportunity to shine a giant light on the issue of FGM/C and move it firmly to the top of the agenda where it belongs.

Kenya’s President Uhuru Kenyatta, sitting beside Canada’s Prime Minister Justin Trudeau at Women Deliver in Vancouver just a few months ago, courageously committed to ending FGM/C in Kenya by 2022, eight years ahead of the Sustainable Development Goal of 2030.

It’s an ambitious promise, a challenging target for sure–but it shows leadership, it shows vision, it shows a commitment to the idea that girls’ human rights must be cherished, must be protected. We hope that other governments around the world will follow and commit resources, improved data and research, laws and policies to protect girls at risk, and support for survivors, so that together we can end FGM/C around the world.

The End of FGM/C is not just the end of a violation of girls’ human rights, it is also the start of increased economic development for practicing communities and has the power to be completely gender transformative. It is a proven fact that when girls and women fully participate in the economy of a country, it results in significant economic advancement.

And so, we ask the global community at the ICPD to join us, to work together on a multi-pronged approach to end FGM/C by 2030.  Whole communities must be mobilized and empowered at the grassroots level. Women and men, girls and boys, health workers, traditional and religious leaders, all have to be empowered to embrace the end of this harmful traditional practice.

We have to address the root causes of gender equality at the community level; we have to listen to and support grassroots organizations that are working in this field; we need an integrated, intersectional approach to ending FGM/C, recognizing the connections with other forms of gender-based violence and linking with existing movements.

We have to work with governments to respond to the adaptations to this violation of girls’ and women’s human rights, include medicalization, cross-border practices, and lowering the age of mutilation/cutting.

Accordingly, we call on all stakeholders to prioritize resources towards grassroots and community led programmes, and to make funding more flexible, sustainable, and accessible.

Whatever our religion, our gender, our ethnicity, –the time has come for every one of us and all our governments to deploy every tool at our disposal to end this harmful practice.

FGM/C is a human rights emergency that continues to exact untold harm on a daily, hourly basis. Together we can end it. Sign up to the Global Platform for Action to End FGM/C today at www.ActionToEndFGMC.com.

This call to action has been endorsed by Amref Health Africa, Coalition on Violence Against Women, End FGM Canada Network, End FGM European Network, Equality Now, Orchid Project, Sahiyo, The Girl Generation, The Inter-African Committee on Traditional Practices, The US End FGM/C Network, There Is No Limit Foundation and Tostan. On  March 18th 2019, the Muslim American Leadership Alliance (MALA) hosted a parallel event on “Addressing FGM in the USA: Safeguarding Survivors and Protecting Victims“ at the UN Commission on the Status of Women 63rd Session in New York. The panel took place at the UN Church Center. The panel convened survivors, policy makers, non-profit leaders, and community organizers to facilitate the dialogue on what necessary steps are needed to ensure ‘zero tolerance’ towards FGM for both survivors and at-risk women and girls. 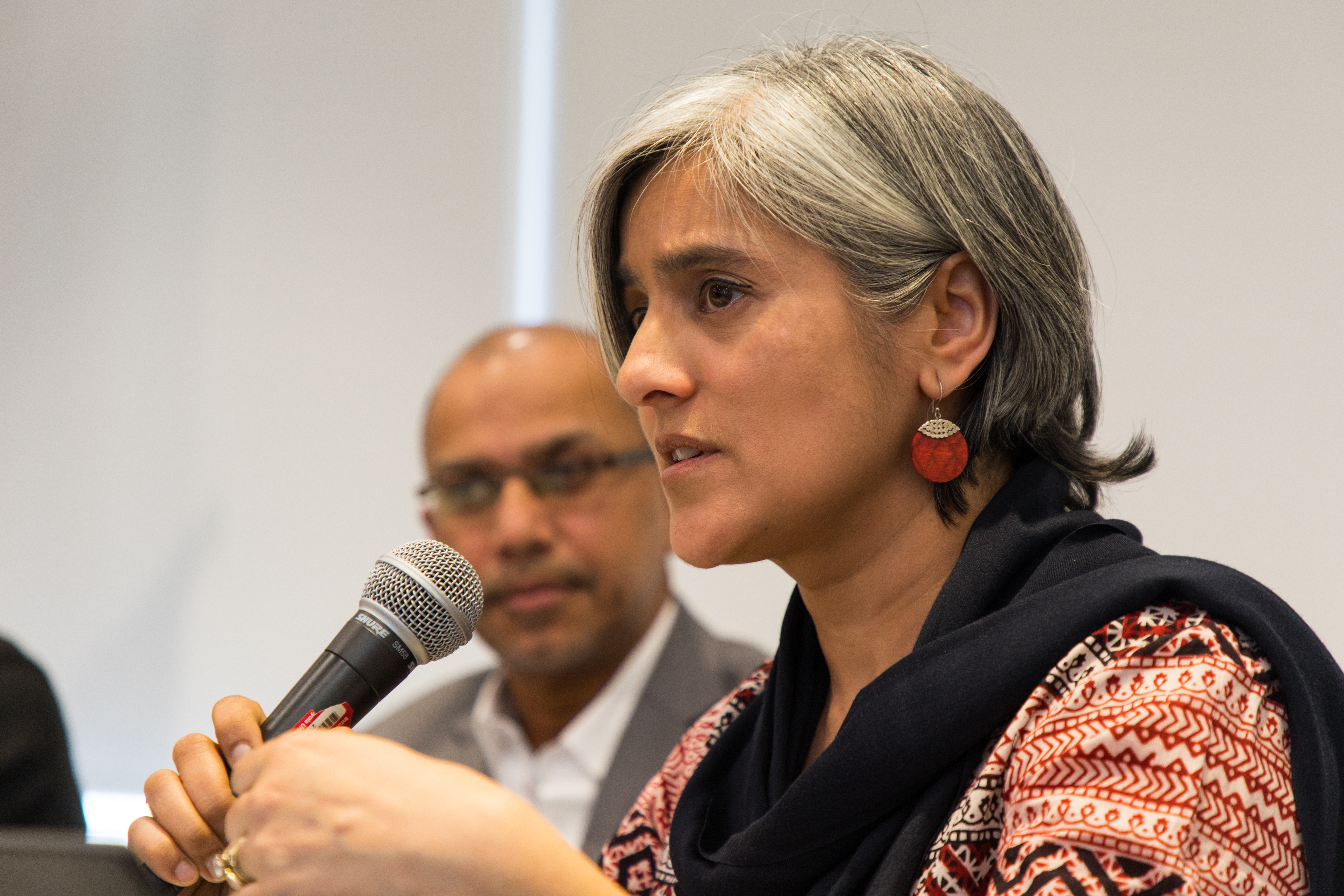 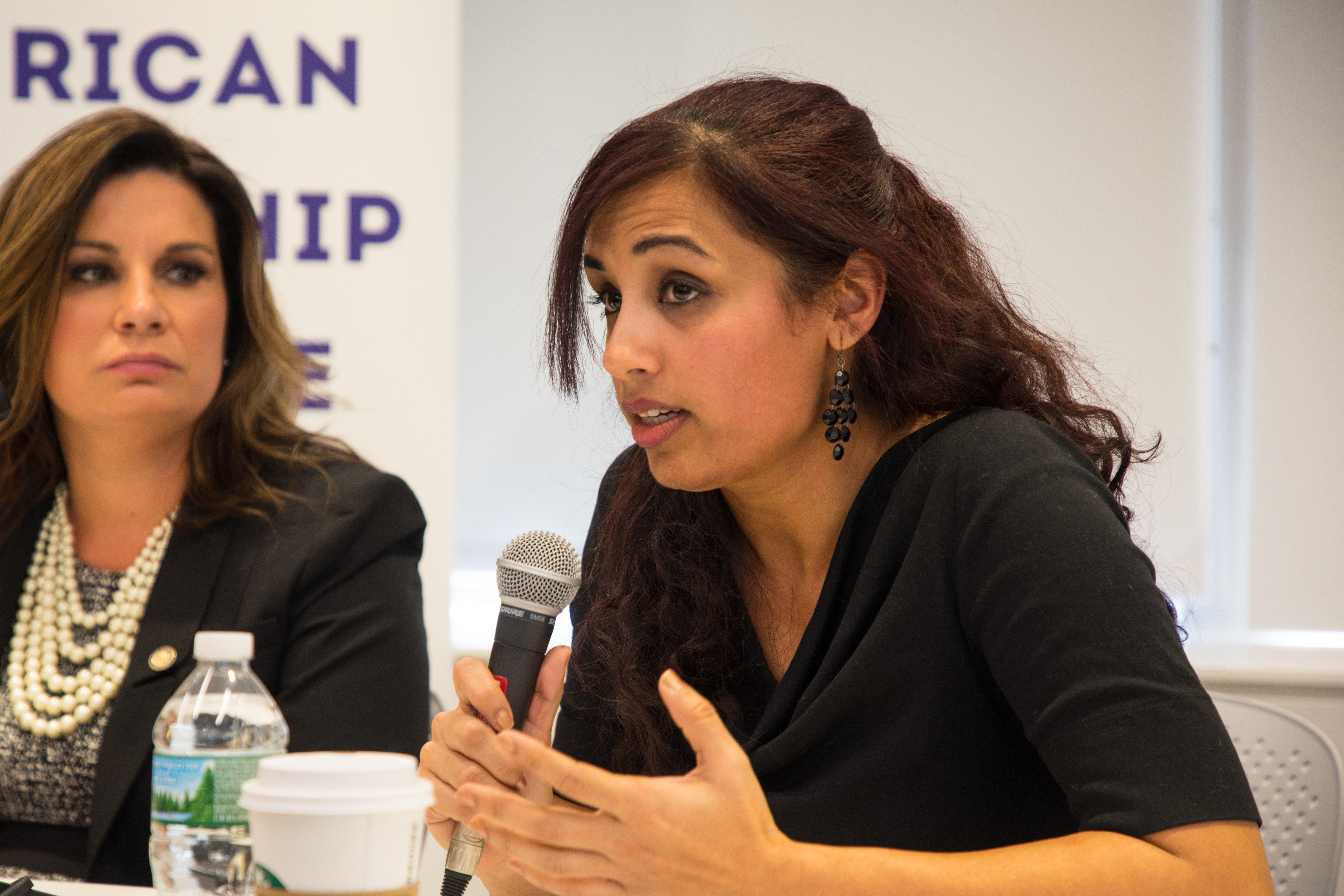 This panel analyzed the practice of FGC in the United States through a medical, psychological, and legislative lens. The panelists collectively suggested a variety of approaches to bringing communities together to gain knowledge and organize.

The event was incredibly popular, with the room at full capacity and more guests listening from the hall. 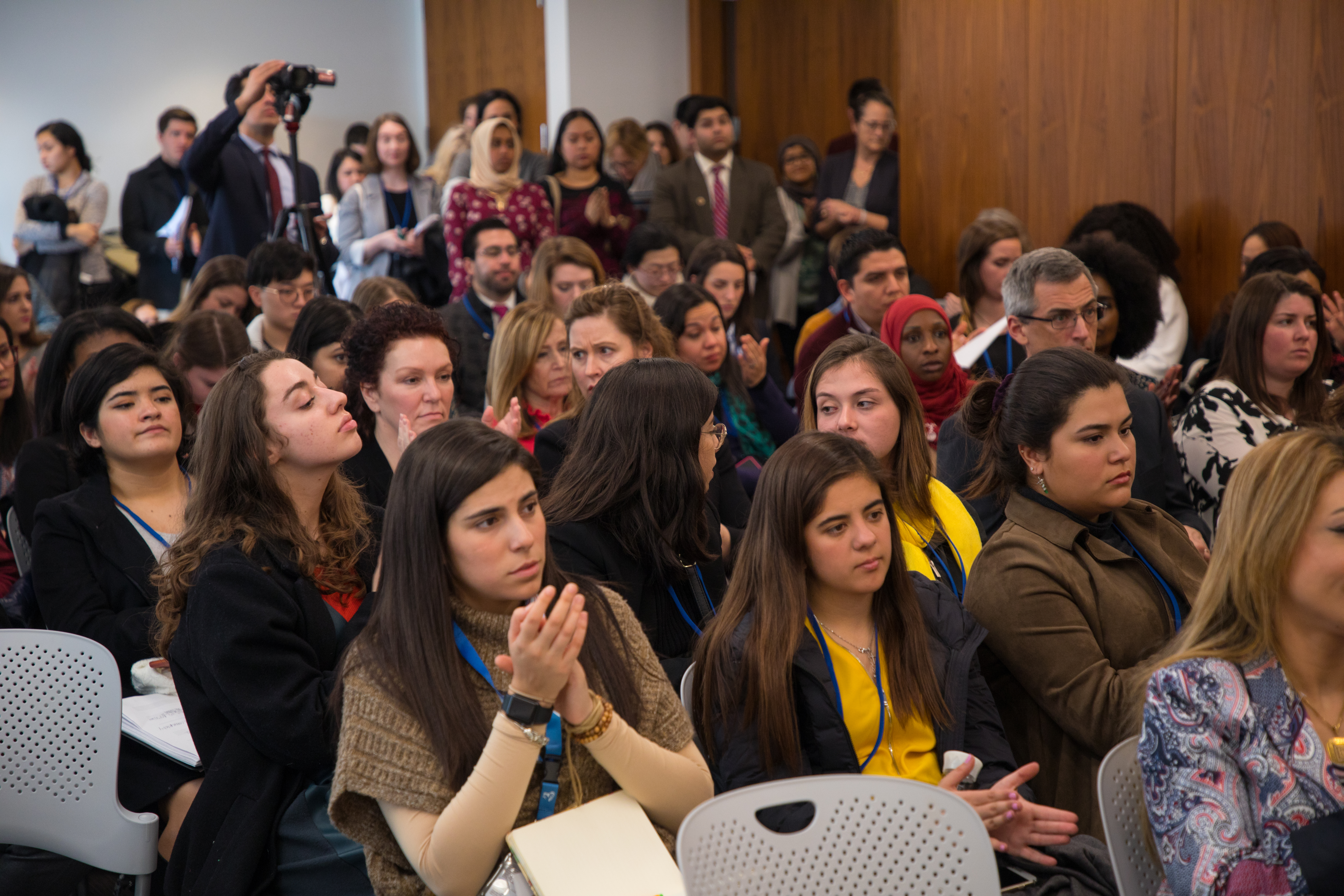 These types of events are essential towards our progress in creating a world without FGC. 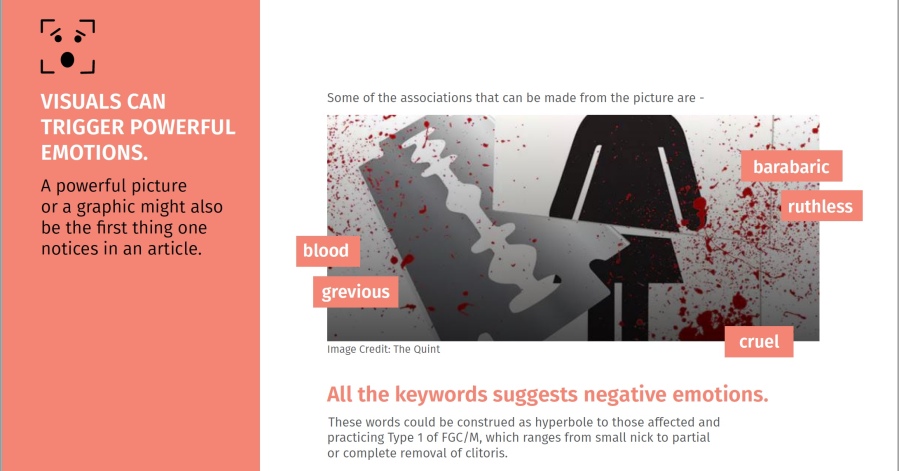 On the eve of International Zero Tolerance Day for Female Genital Cutting 2017, Sahiyo is proud to launch its first media toolkit developed to promote sensitive and effective depiction of Female Genital Cutting/Mutilation (FGC/M) with special reference to Khatna in the Dawoodi Bohra community.

This toolkit will be available as an open-source, freely downloadable and distributable content for journalists, writers, bloggers, filmmakers, designers and other organisations who want to understand how to effectively and sensitively talk about the practice of Khatna.

FGC/M is a complex subject involving many socio-cultural factors. 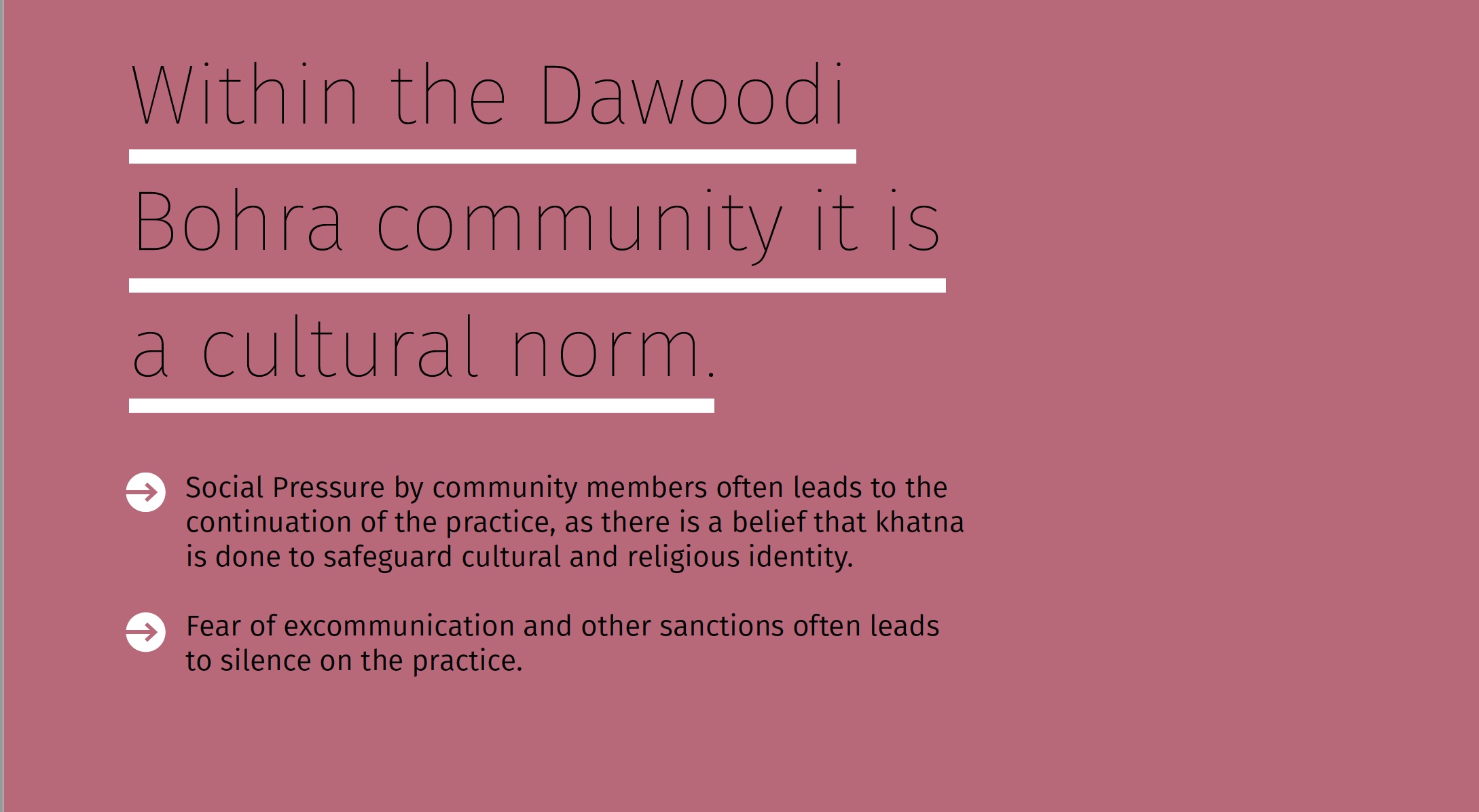 The guidelines and examples in the toolkit  are intended to ensure that all media actors reporting on FGC/M are aware of these factors and are able to prioritize the ethical considerations that preserve the safety, confidentiality, and dignity of survivors, their families, their communities, and those who are trying to help them such as NGOs like Sahiyo.

This document is divided into four broad sections:

We have elaborated on a nuanced use of terminology, visuals and reportage, illustrating best practices and ways for media to impact the movement on the practice effectively. 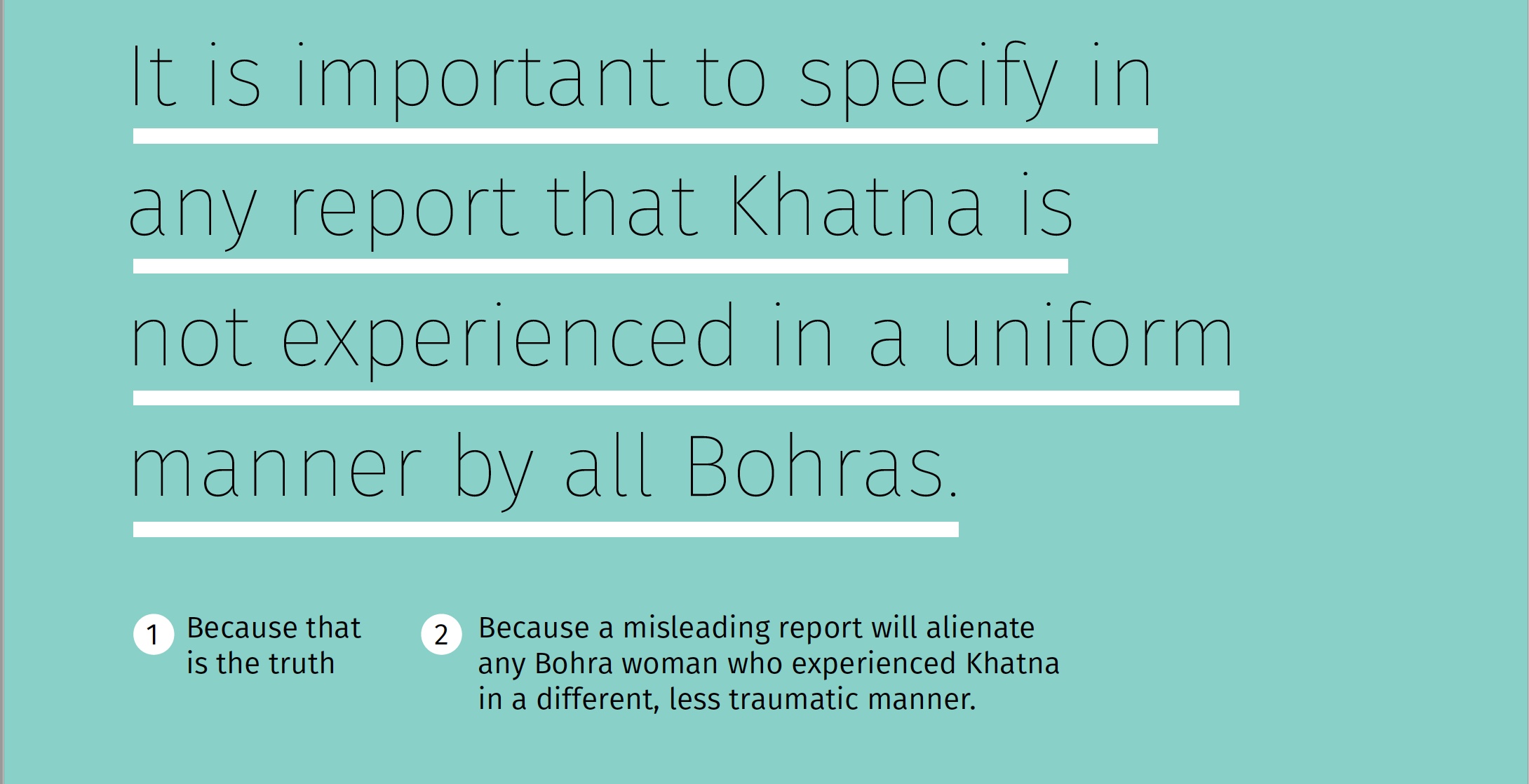 Through this toolkit, our objective is to offer an insider’s perspective on reporting and writing, to guide the media on how to create awareness in a sensitive manner that promotes social change about ‘Khatna’ or ‘Female Genital Cutting’ prevalent in the Dawoodi Bohra community in India and its diaspora worldwide.

This resource guide acknowledges the role of the media and organizations working to shed light on FGC/M .

We hope that this toolkit helps the media (or anyone interested in depicting the issue) in avoiding factual errors, sensationalized visuals, judgemental language and unintentional vilification of the community; to further be a stronger and effective partner in furthering a landmark movement to end Khatna among Bohras.