In May 2018, Sahiyo and StoryCenter, hosted a digital storytelling workshop where FGC survivors from across the U.S. could come together to share their experiences. In September 2018, the digital stories were released online and several screenings of the digital stories have occurred. Now, Sahiyo and StoryCenter have been named 1 of 3 winners for the ViiV Healthcare #EndFGM Positive Action Challenge. The #ENDFGM Positive Action Challenge supports innovative interventions to bring about a sustained change in attitudes and social norms towards ending FGC. In 2019, Sahiyo and StoryteCenter will work to expand the digital storytelling project to become “Voices to End FGM/C” by creating a web-based format so that survivors from around the world can use personal storytelling for social norm change on a global level.

Other winners of this challenge include Grandmother Project: Change Through Culture and Circuit Pointe.

The Muslim American Leadership Alliance (MALA), a civic and community organization committed to promoting individual freedom and diversity, and to celebrating Muslim American heritage, honored Sahiyo Co-founder, Mariya Taher with the first annual MALA Human Rights Storytellers Award. This award recognizes Mariya and Sahiyo’s outstanding contribution to defending human rights through storytelling, in particular, working to protect women’s bodies from cutting – and bringing together women who have been cut on a journey of healing and empowerment. The award was given in recognition of the U.S. Sahiyo Stories project and the Human Rights Storytellers Award was presented to Mariya at MALA’s Third Annual Gala at the Chicago History Museum on November 6, 2018. 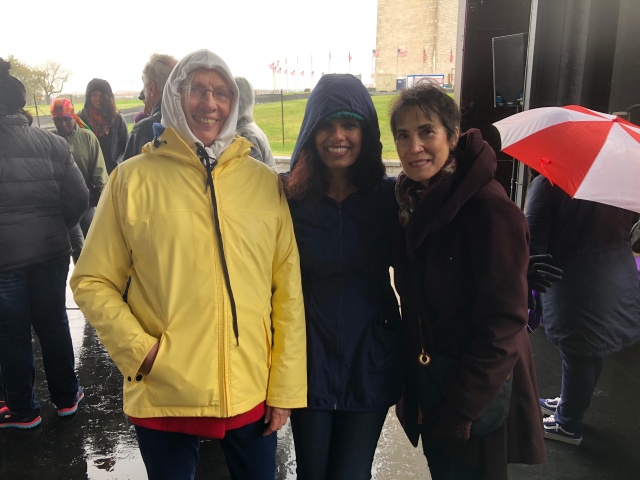 Each year, the Global Women P.E.A.C.E. Foundation hosts a 5K Walk Against FGM in Washington, D.C., and activists working to end FGC around the world come to participate. This year, the event was extended to 2-days and commenced with a Global Woman Awards ceremony on Friday, Oct 26th at the Milken Institute of George Washington University.  Two of the award recipients, included Maria Akhter and Severina Sangurikuri, two women who took part in the U.S. Sahiyo Stories project. They each received a Global Woman Awards from the Global Woman Peace Foundation in the categories of Student Ambassador and Survivor Activist respectively.

Here’s what Maria has to say about receiving her award:

I am thrilled, honored and humbled to receive the Global Woman Award in the Student Ambassador category from the Global Woman Peace Foundation. With boundless support from friends, family, and the hardworking activists in Sahiyo and other organizations working to end FGM/C, I’ve been able to turn my quiet interest in activism into a bold passion and lifelong commitment to a cause I hold near and dear to my heart. Receiving this award reinforces and challenges me to continue working in new ways to break the silence around FGM/C and end the practice for future generations.

The 5K Walk, scheduled for October 27th was at the last minute cancelled due to severe winds and rains. Yet, prior to the walk, people still gathered to listen to the guest speakers such as FGC survivor, Lola Oje from Nigeria who shared that she refuses to allow her beautiful daughter to be subjected to FGC. To learn more about the event, visit ‘A Mini United Nations Convenes in Washington, D.C.’ 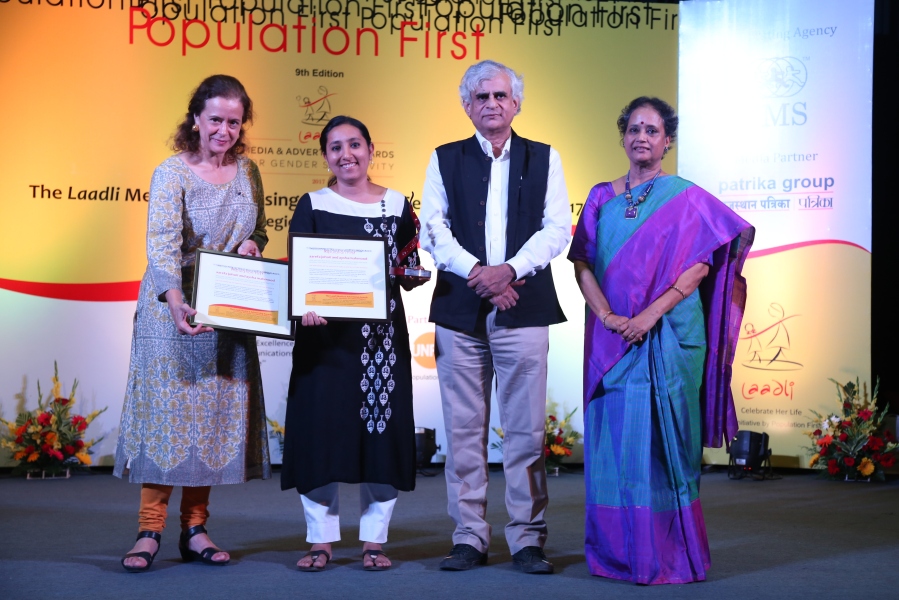 Sahiyo’s investigative report on the previously unknown prevalence of Female Genital Cutting in the Indian state of Kerala won the prestigious Laadli Media and Advertising Award for Gender Sensitivity for the year 2017. The report was authored by Sahiyo co-founder Aarefa Johari and independent writer and activist Aysha Mahmood.

Johari received the Laadli award on behalf of both authors at an event in Delhi on September 14 by Laadli’s founding organisation, Population First. Eminent journalist P Sainath was the chief guest at the event.

Johari and Mahmood’s investigation uncovered, for the first time, that FGC was being practiced covertly by two doctors in a clinic in the city of Kozhikide (Calicut) in Kerala. The doctors admitted to cutting girls and women of all ages from various Sunni Muslim sects in Kerala. Previously, it was widely believed that the Bohras were the only community practicing FGC in India. (Read the Sahiyo investigation report here.)

The Sahiyo investigation caused a furore in Kerala after Mathrubhoomi, a prominent Malayalam newspaper, conducted a follow-up exposé of the same clinic, and published a first-person account of a young woman from Kerala who had undergone FGC as a child. The exposés led to a temporary shut down of the clinic in Calicut where girls were being cut and prompted several religious leaders to publicly condemn the practice. The health minister of Kerala also ordered the state police to take strict action against anyone found practicing FGC.

Sahiyo’s co-founders Insia Dariwala and Aarefa Johari won the ShoorVeer Awards 2018 in Mumbai on August 10. The awards, given by the organisation Ample Missiion, were instituted to honour the bravery and courage of “common men and women who have done uncommon things”. The word “ShoorVeer” is Hindi for a brave warrior.

A total of 14 individuals from across India were awarded ShoorVeer awards this year, including two police officers who have excelled in their duties, two children who saved their friend’s life, an amputee sportsman and several women and men working in the fields of education, health, and human rights.

Aarefa won the award for her work as a Sahiyo co-founder to end the practice of Female Genital Cutting. Insia’s award was a recognition of not just her work to end FGC, but also her work to raise awareness about child sexual abuse through her organisation, The Hands of Hope Foundation.